Poser is a program for rendering ... doesn't tell you much, does it.

Poser was originally conceptualized as a computer version of those little wooden men used for models in doing art (so that you can pose the little figure and keep all the proportions and perspectives properly focused, without needing a live model).  Somewhere in the process it gained the ability to render 3D models, animation and approximate real art rather well.  Much to my surprise it is up to version 9.  Runs about $99.00 on Amazon, which is pretty impressive for powerful graphics software. 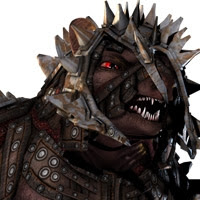 0 reviews  |  Write a review
Share
Description Reviews (0)
Package Includes:
Ratz figure w/ morphs, textures &
9 Poses for Ratz and props
Conforming Armor/Harness (Harness, Plates, Spikes and Leather)
3 Weapons Props - Club, Axe and Hand Blades
Advanced Material settings for Poser 7.2 & up
DS3 default MAT poses
Everything you see in the advertisement the software will do for you, allowing you to create all of those images in those poses, and many others, with a number of 3D and 2D backgrounds.

There are literally thousands of models and props available for purchase or for free.

Anyway, this is an explanation of what Poser is, so that when you hear about it it will make sense to you.

The illustrations at http://adrr.com/story/ are all pretty much done with Poser.  If I were a real artist, they would look much, much better.  But until you have an art budget (which you should get if you are intending to sell things), when you are in the proof of concept state, or just for friends, Poser is well worth understanding.

Podcasts and such on writing // Mistworld

Writing is very useful for game and game design and especially scenario design.
One difference is that with a scenario you can sometimes get away with more exposition.

You would think a world where the souls of the damned sink into the ground to mingle with undead and demons in a radioactive hell wherever light does not reach would not have the description "pastoral" -- but you would have missed just how far the light reaches.

Not how I plan to introduce Mistworld if I do a D&D reboot, (introduction and link to the proof of concept pdf here:  http://www.adrr.com/story/mist001.htm)  -- given that I've actually got D&D adaptations that have been done of parts of it, I've been giving that some thought -- but it is the sort of thing that is possible.

Many areas of Mistworld have this for a pattern:

I've been thinking of doing something on the lines of the Regular Folks campaign to go with the reboot.

The characters would start as 0 level characters living at steadings.  A message would come from the shrine with a quest of sorts, an assignment, to hunt for verdigris foxes.  There probably aren't any, but they are a harbinger. d3+2 hit points, do d3-1/+1 when they bite (the physical damage is d3-1 so from 0-2, +1 magical damage from decay).  unarmored, +1 from size and high dexterity.  Their moral breaks easily.

Turns out that there are some (2d2 worth).  The report that there really are some is not good news, it means that the beneath is drawing closer in this location

The characters are sent to the nearest town to take the news, and seek back-up, after they are sent to warn those in the steadings.

While they are at the town, refugees arrive, with news of a disaster.  At this point they can choose to be initiated and begin to adventure.
I had roughed this out, with a number of encounters, creatures, etc., before, but I lost my copy of the rough, which was done for BRP.  I'm now thinking of redoing it for OD&D/D&D.  I'm just not sure it is worth the effort.

But it did give me a different introduction to the setting.
Posted by Stephen at 6:44 AM No comments:

It is dark, cold and I'm alone
tangled, I can't think
They've taken my medication, I can't remember who I am or how old I am
tangled, like knotted yarn
The blue monkeys are making me knit and it keeps sucking my mind away

A story about a place where knitting is magical, and not necessarily in a good way.

http://jessnevins.tumblr.com/post/8699508570/cheering-myself-up-with-the-pulp-ideasplosion
Posted by Stephen at 8:18 PM No comments: